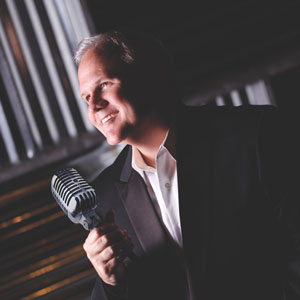 Back to Events Listings

David Slater is a vocalist and piano player who has performed in many of the finest venues in the country. In 1987 he was male vocalist champion of TV’s Star Search. David then signed with Capitol Records and released several charted records.

He has toured extensively and worked with some of the best-known entertainers in the world, including Dolly Parton, Kenny Rogers, Garth Brooks, Wayne Newton, Tony Orlando, The Little River Band, and many others.

David is now based in Dallas, Texas, singing and playing classic standards made famous by legendary performers such as Frank Sinatra, Dean Martin, Ella Fitzgerald and Nat King Cole. He has formed The David Slater Combo, a swinging jazz group featuring some of the best musicians in Dallas.

His newest CD, “As Time Goes By,” is a stirring, jazzy tribute to the singers and
songwriters who made the “Great American Songbook” so legendary.